Across the Line – Nayanika Mahtani, PGP 92 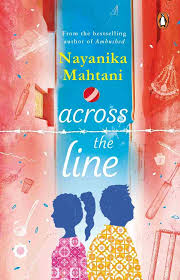 1947
New Delhi. Cyril Radcliffe's hands are clammy, partly from the heat but mostly from the enormity of the task assigned. Mopping the sweat off his brow, he picks up his pen, draws a deep breath--and a dark line.
Rawalpindi. A barbaric frenzy of rioters fills the streets, disrupting a game of pithoo between Toshi and her brother, Tarlok, shattering their lives unimaginably.

2008
Rawalpindi. Cricket-crazy Inaya is sneaking out behind her father's back for net practice when she discovers that she is not the only one in her family keeping a secret.
New Delhi. Jai accidentally stumbles upon an old, hidden away diary in his kitchen. The date of its last entry: 17 August 1947.

As Jai and Inaya's unlikely worlds collide, another story unfolds. A story that started with the drawing of a line. A story that shifts the truth in their lives.

Order Now!
About the Book

Nayanika Mahtani once harboured dreams of becoming a stage actor, but she followed the proverbial left side of her brain to do an MBA at IIM Bangalore and became an investment banker. A decade later, she followed her heart to live in Africa. Since then, she’s been following the right side of her brain and is now an author and screenwriter. Nayanika’s books include Across the Line, Ambushed and The Gory Story of Genghis Khan (aka Don’t Mess with the Mongols). She has also recently co-written the story and screenplay for a Hindi film based on the extraordinary life of the mathematical genius, Shakuntala Devi. Nayanika lives in London with her family, their dog, hamster and two goldfish named Sushi and Fishfinger.

Endorsements
This evocative tale of heartache buoyed by hope, travels from 1947 towards the present, tugging at our heartstrings and sweeping us along. A compelling and uplifting story that lingers long after the last page is turned
– Vidya Balan
Order Now

Preview
Disclosure of Material Connection: Some of the links in the page above are "affiliate links." This means if you click on the link and purchase the item, I will receive an affiliate commission. I am disclosing this in accordance with the Federal Trade Commission's 16 CFR, Part 255: "Guides Concerning the Use of Endorsements and Testimonials in Advertising."

Giving Back Opportunities at IIMB

How can you contribute?